Bengal is famous for its unique craftsmanship and artistic values. The unique products of even rural artisans bear the impression of high artistic values. Similarly the Bengal handloom Sarees has created its own global identity due to its unique designs and craftsmanship of weavers of Bengal. The traditional handloom Sarees of Bengal occupies a special status even in the era of modern fashion. The variation of design, colour combination and the weaving pattern of Bengal handloom Sarees like Dhania Khali, Tangail, Aarong and of course the unique Baluchari. A number of traditional weaving villages are still in existence in West Bengal such as Shantipur in Nadia district, Begumpur in Hooghly district, Kenje- Kura in Bankura district. Centuries back these villages were known as Weavers Heaven of Bengal. The Baluchari Sarees are adorned all over the world for its unique designs, depicting ancient stories on its Borders and Pallus. Some times it revives the themes of vedic or events of ancient times.

The history of Baluchari Saree is very much interesting as it goes back to 200 years ago in the 18th century during the regime of Nawab Murshidquali Khan though Baluchari originated much after Muslin. Murshidquali Khan happens to be the Nawab of Bengal during 18th century with a very deep sense of rural artistic craftsmanship and showed great concern to bring up unique product of rural Bengal into the lime light. He had a special craze for the creativity of the rural people and the traditional crafts of his regime.

The origin of Baluchari Sarees is stated to be in a very small village named Baluchar in the bank of river Bhagirathi in Murshidabad district of West Bengal. The word Baluchari itself means sandy river bank. The Bhagirathi river remained the main waterway for transportation of various product from one part of Bengal to another during that period. The Bhagirathi river remained changing its course time to time and the social set up and cultural pattern also changed remarkably with the change of the river’s flow. There was a significant topographical change on both sides of Bhagirathi river. The villagers and agricultural farmers had to shift their home stead with the change of course of Bhagirathi river. But during British regime, there was a set back for the rural industries and crafts of the then undivided Bengal. The Bhagirathi river became means of transport for the valuable agricultural products viz. Rice, Jute, Silk and Metalwares to Kolkata port and finally these were used to ship from Kolkata  port to Britain. The ignorance of unique art and craft of Bengal and many intricate handicrafts by the British rulers created a threat to existence of these artistic creativity of rural Bengal. The artisans were compelled to switch over to some other works. Similarly Baluchari handloom craft was also at the threshold of ruins. It is stated that a famous artist named Subho Thakur who took a pledge to re-cultivate these unique tradition of Baluchari crafts, which was almost at the phase of disillusion. Shri Subho Thakur came into contact with a Master Weaver named Akshay Kumar Das of Bishnupur, now in Bankura district, and invited him to his centre. It was Subho Thakur who inspired Akshay Kumar Das, Master Weaver to pick up the technique of Jacquard weaving. Shri Das, Master Weaver worked hard and mastered the weaving of Baluchari on their looms and returned to Bishnupur after some time. Thus the Baluchari craft survived due to its shifting to Bishnupur from Murshidabad during the British rule. 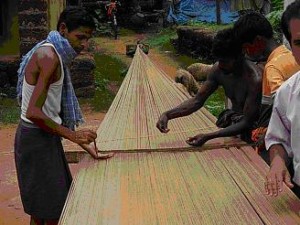 A stage in saree production

Bishnupur remained a prominent place in the history of Bengal for being capital of Malla Dynasty. The original art of Malla dynasty is witnessed even today on the bricks of old temples and in the architectural ruins of Malla Dynasty in and around Bishnupur and Bankura. The art works of temples of Bishnupur are known as Terra Cotta. The brick art was also transformed into earthern pots and ornamental pieces placed in religious places of Bishnupur area and it was spread over even in the contiguous areas ruled by Malla Dynasty, which stretches to the neighboring districts of Purulia, West Midnapur and some places of Jharkhand also.

Saree being woven on the loom

The artistic designs of Baluchari Sarees are mostly depicting mythological stories similar to that commonly found on the temples of Bishnupur & Bankura of West Bengal. Baluchari Sarees are mainly distinguished for their elaborate borders and fabulous pallus. The borders are ornamental and surround Kalka motifs within it. A series of figures is designed in rows and motifs, which are woven diagonally. Mostly the motif designs are in four alternative colours on a shaded background. The most popular colours of Baluchari saree designs include red, green, white, blue and yellow. Initially these motifs were woven on silver jari, which has subsequently been replaced by various shining threads. The theme of Baluchari weaving remains focused to depict mythological stories and folk tales on the pallus of sarees. Some of the designs include tales of Ramayana & Mahabharata. Motifs are interspersed with flowering bunches, animals, architectural scenes, women riding horse with a rose in one hand, pleasure boat, court scenes of Muslim era, women smoking ‘huccah’ etc. 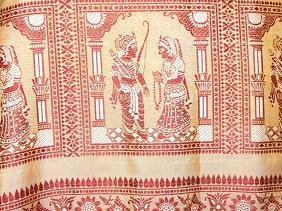 Weaving of Baluchari Saree passes through a series of processing.

Baluchari sarees are also known as land mark of handloom weaving of silk sarees. The fabric of Baluchari saree is very fine and transparent mostly made of Murshidabad silk used with a soft drape. A Master Weaver, almost takes 20-25 days to complete weaving a Baluchari Saree with exquisite design. Surprisingly, creation of its intricate designs with high demand in the fashion world called for technical intervention for easing out the production mechanism. The latest development in weaving technique of Baluchari saree inspired scientists of Central Mechanical Engineering Research Institute, Durgapur to develop a machine to reduce the time of Baluchari saree weaving with an attractive finish. The innovated machine is called Jaquard Card Punching Machine which can be operated for weaving of computerized designs also. This machine will help a Master Weaver to complete weaving of an exclusive Baluchari Saree within 10-12 days and will facilitate replacing of traditional motifs and theme with an attractive and latest concept. The machine is likely to cost Rs. 1.5 to 2.0 lakhs if commercially manufactured. NABARD has also taken up Baluchari as part of its plan to promote traditional crafts of Bengal like Terra Cotta and Bell Metal work. The weavers of Baluchari will have easy excess to CAD/CAM facilities due to promotional efforts of NABARD.

G.I. helps a community of producers to differentiate their products to fetch premium price. It can also be used for protection of products based on traditional knowledge. The geographical indication refers to the products as originated from a particular place with a given quality reputation and other characteristic attributed to its geographical origin. A number of traditional products of West Bengal like Darjeeling tea are identified to qualify for GI protection which includes Baluchari, Murshidabad Silk, Phulia Tant Sarees, Bishnupur Terra Cotta and Krishnanagar Martir Putul, besides several varieties of Mango, rice and beetle leaves produced in the state. An intensive awareness amongst stakeholders is still needed for GI protection of Baluchari Sarees in West Bengal.

In the era of global fashion, Baluchari Sarees are adorned as sign of aristocracy, symbol of status, taste of aesthetic fashion and of course legend of Bengal handloom. Let’s stretch our helping hand in whatever way possible in supporting the poor weavers of this unique craft and try to preserve such endangered craftsmanship from extinction.

This entry was posted in Silk. Bookmark the permalink.